I know it has been quite a while since I last entered something on this blog. However, most of my activity has occurred on the blog page for my popular podcast, Think Like A Leader.

So, to catch up on what's happening with the podcast, come on over to nctpcast.libsyn.com and join the fun.

Plus, if you have suggestions for:

then, please let me know. You can email me, leave messages on the Think Like A Leader hotline (206-984-3136), or just prepare an audio file and send it to me as an MP3. Perhaps, I can use some of the content you provide.

Regardless, just know that I'm still alive and kicking...and striving to provide the very best information on technology planning, leadership, and comprehensive improvement that can be found anywhere. With you as my team partner, we just can't lose, can we?
Posted by Dr. Larry Anderson at 2:55 PM No comments: 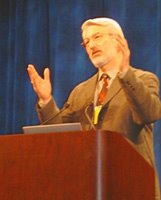 I am very excited to have created and posted a new podcast, Think Like A Leader, yesterday. The first episode is merely a quick overview of what is coming in the future, but it was a fun experience to create the podcast and to be using a new process/procedure (new to me, at least).

In the past, I have created podcasts using Podcast Maker™ or GarageBand (a fabulous portion of Apple's iLife suite), then posting these to my .mac account. However, with the able and gracious assistance of Ted Lai (creator of the award winning podcast, SoCal Hockey) in Orange County, CA, I used the Libsyn service.

Here's the process I used (at least an extremely basic explanation):
1. Record and edit project in GarageBand
2. Save audio as .m4a from GarageBand
3. Upload .m4a to Libsyn
4. "Tweak" the Libsyn blog page just a bit
5. Submit podcast to iTunes Music Store

So, I encourage you to check out the podcast, then send me your ideas, suggestions, or other comments. Then, if you like what you hear and/or think you have something to contribute, please consider subscribing to the podcast. Also, feel free to recommend the podcast to others.

I know that Think Like A Leader will get much better in the forthcoming episodes, so just enjoy the ride with me and let's grow as leaders together!
Posted by Dr. Larry Anderson at 8:17 AM No comments:

My last posting was about the brand new podcast here in North Mississippi for realtors. I've had some interest expressed in this, since most of our work with podcasting occurs in schools. So, here's my question:

Would you like to listen to this first podcast episode?

If so, let me hear from you. Leave comments here or email me.
Posted by Dr. Larry Anderson at 4:35 PM No comments:

Today was a good day. I was so pumped to get to have a meeting with Norma Cother, the managing broker for Crye-Leike Realty here in Tupelo, MS. My purpose for meeting with her? Podcasting!

I had the very strong feeling that Norma, a terrific lady and absolutely outstanding realtor, needed to be the very first realtor in Tupelo (or North Mississippi, for that matter) to have her own podcast.

Norma admitted that she had never heard of podcasting. However, just as soon as I started telling her about it, she "got it." She was immediately on board and ready to put the first episode together.

So, we'll be issuing the first podcast by early next week. This represents a victory, not just for having another convert to podcasting, but also for seeing podcasting becoming another powerful marketing and information tool in the real estate realm. Norma will be "tuning in" to other podcasts, just so she can get some more ideas for how her podcast will increase in value. No doubt, she will be a quite successful podcaster.

Ahhh, the feel of sweet success!

[Note: For those of you who may not know, Tupelo, MS is the birthplace of Elvis Presley — so that fact will make Norma's podcast even more appealing. There is so much history in this town, yet it is blessed with a thriving business community. Elvis would have been proud!]
Posted by Dr. Larry Anderson at 9:44 PM No comments:

Well, I didn't get any more postings completed as the conference went along, so this will be just a brief wrap-up of the sessions and experiences we had at the MS Educational Computing Association (MECA) annual conference in Jackson, MS.

For me, the main focus of the conference was participation by the Apple Distinguished Educators (ADE) and how they provided such stellar leadership in sessions and workshops. Actually, I was the only ADE from Mississippi who participated in this year's conference, because ADE Kameron Ball from Mississippi had a very sick baby and was unable to attend.

Dr. Carl Owens led multiple hands-on workshops dealing with the new iLife '06 suite of applications that Apple had released only a couple of weeks ago. And, the new additions are just fantastic. It was particularly fun for me to see the faces of workshop participants and hear their voices as they were coming out of the hands-on lab. Such excitement! Carl always has a bag of his newest "techno-toys," too, and that's a highlight for the Mississippi educators--who have come to expect such things from Carl. They think he is so cool!

Anthony Robinson gave great workshops, too, including one on digital storytelling that was particularly well-received. Too, he led a session about his recent experiences as a Fulbright Scholar, spending six weeks in the Czech Republic. Besides giving workshops and sessions alone, he helped other ADEs during their workshops and sessions.

Julene Reed was my very special sidekick in the sessions we led. Perhaps you have read, already, about the phenomenal success we had in our hands-on workshop, Podcasting: From Start to Finish in 90 Minutes, that we gave on Monday night from 8:00-9:30 (even though the participants didn't leave the room until after 10:30!!!!). She and I presented two other sessions: Podcasting and Podcatching for the Absolute Beginner, followed by Podcasting Studio Construction Kit: Soup to Nuts. Both sessions were very well attended.

Although Mississippi had been hit extremely hard by Hurricane Katrina and many schools are barely functioning currently, the conference attendance was up by more than 100 people this year! That is a tremendous attribution to the resilience of Mississippi educators who are determined to stand together and make this a positive experience. Even in the midst of the tear-jerking reports from the MS Gulf Coast schools, there was laughter and applause that roared still louder. I am so proud to be a Mississippian, particularly at such a time as this!

Now, why don't you make plans to attend the MECA Conference next year? It's scheduled for January 31-February 2, 2007 in Jackson, MS. Y'all come...ya hear?
Posted by Dr. Larry Anderson at 8:29 AM No comments:

Second day at the conference site, yet today was preconference day. The actual conference doesn't kick off until tomorrow, Tuesday. Activities in which we engaged today included getting the hands-on labs ready for the workshops that began in the evening.

Tonight's first workshop, "iLife '06," was led by Dr. Carl Owens (Apple Distinguished Educator and Professor of Teacher Education and Director of the Instructional Resources Center at Tennessee Tech University). As usual, Dr. Owens did a fabulous job showing attendees the new features of iLife. He gave them a thorough understanding of how to leverage the power of iLife to maximize their teaching. The workshop ran from 6:15 - 7:45 PM.

Then came the really exciting workshop!

From 8:00 - 9:30 PM, ADE (Apple Distinguished Educator) Julene Reed, from Memphis, TN, and I conducted a hands-on workshop titled Podcasting: From Start to Finish in 90 Minutes! What a fabulous time we all had with approximately 20 brave souls who, even though they had had a full day already, came in to learn how to make their own podcasts in such a short time!

We had the most outstanding group of educators who, no matter what the obstacle, would not give up. Each on of them teamed up with another workshop participant, then the two of them used GarageBand (from iLife '06) to create their first podcast. The great news is that all teams finished on time and then we played all the new podcasts for the entire group. Applause rang out across the amphitheater as they celebrated their newfound success.

I am so thrilled for these friends. I wish I could let you hear their first efforts, but I'll have to get their permission first. So, stay tuned.
Posted by Dr. Larry Anderson at 12:00 AM No comments:

Today (actually, it was yesterday, since it's already past midnight here), I drove just over 3 hours to get to Jackson, MS, where the annual MS Educational Computing Association (MECA) Conference will be held this week. The actual conference doesn't begin until Tuesday; however, I joined with several Apple employees and a group of Apple Distinguished Educators this afternoon so we could unpack and install a lab full of Macintosh Powerbooks and iBooks to be used in hands-on sessions at the conference.

The Apple Distinguished Educators (ADE) who came early to help set up are Dr. Carl Owens, Professor of Educational Technology from Tennessee Tech University in Cookeville, TN, and Anthony Robinson, Technology Director for the Putnam County (TN) School District. Both Carl and Anthony have come to the MECA Conference for six sequential years and we are thrilled to have them back this year. Joining us tomorrow will be another ADE, Julene Reed, Director of Academic Technologies at St. George's Independent Schools in Collierville, TN -- a suburb of Memphis.

Thanks to the Apple team: Adair, Jennifer, Gary, Neill, and Linda for helping to make this the most exciting MECA Conference ever!

Also, thanks to one very special "outsider" who showed up, rather unexpectedly, to offer help. That outsider was my oldest brother, James "Andy" Anderson, from Crystal Lake, IL. But, he was actually in Jackson during the MECA Conference, so he came on over to help. There is some question as to how much help he really was, but ... oh well, I suppose it was pretty good to have him there, after all. Truly, all members of the team enjoyed Andy and expressed their appreciation for his arduous labors. Nobody thanked him, though, for his nearly-endless stream of lame jokes! :-)

After an afternoon of hard work to get the lab set up for tomorrow, we all went out for some good ole' Mississippi Bar-B-Q at a very popular restaurant, Red, Hot, 'n Blue. Man, that was some really good eatin'

I hope you will listen to my audioblog posted tonight, as well. All comments and/or questions are welcome!
Posted by Dr. Larry Anderson at 12:55 AM 1 comment: